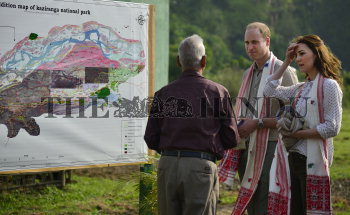 Caption : KAZIRANGA, ASSAM, 13/04/2016: The Duke and Duchess of Cambridge couple is being briefed by a forest official just before going for a jeep safari in the Kaziranga National Park in Bokakhat district of Assam on April 13, 2016. The British royal couple is visiting the wildlife park specifically to focus global attention on conservation. The 480-square-kilometer (185-square-mile) grassland park is home to the world's largest population of rare, one-horned rhinos as well as other endangered species, including swamp deer and the Hoolock gibbon. Photo: Ritu Raj Konwar