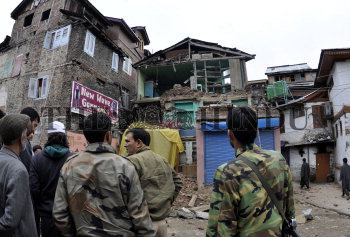 Caption : SRINAGAR, JAMMU AND KASHMIR, 10/04/2016: Policemen examine a residential house which was damaged after a powerful earthquake that shook Kashmir and northern Afghanistan, with tremors felt as widely as Pakistan and northern in Srinagar on April 10, 2016. The magnitude 6.8 quake was centered in the mountainous Hindu Kush region, the US Geological Survey reported. In October 2015, a magnitude-7.5 quake in the same border area killed close to 300 people. Photo: Nissar Ahmad