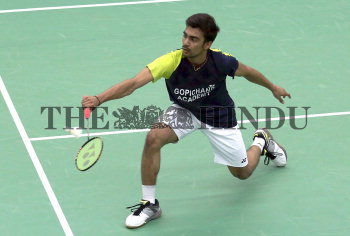 Caption : CHANDIGARH, 10/04/2016: Sameer Verma of Air India, who defeated his sibling Sourabh Verma of Petroleum Sports Promotion Board (PSPB) in two consecutive sets of 21-16, in action during the men's singles final of the National badminton championship in Chandigarh on April 10, 2016. Photo: Akhilesh Kumar