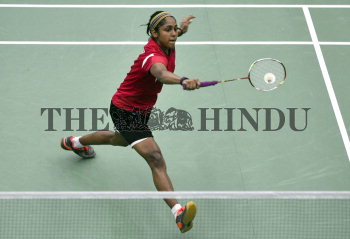 Caption : CHANDIGARH, 09/04/2016: Tanvi Lad of Petroleum Sports Promotion Board (PSPB) in action against Rasika Raje of Airport Authority of India (AAI) during the women's singles semifinals of the National badminton championship at Punjab University in Chandigarh on April 09, 2016. Tanvi Lad won the match. Photo: Akhilesh Kumar