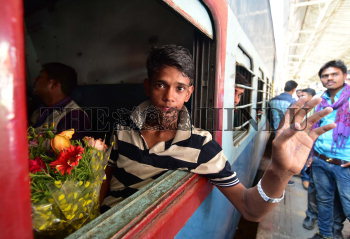 Caption : BHOPAL, MADHYA PRADESH, 06/04/2016: 16 year old Pakistani boy Mohammad Ramzan, who has been stranded in Bhopal for over two years, leaving to Bangladesh from Amarkantak Express to be reunited with his father, in Bhopal on April 06, 2016. Photo: A. M. Faruqui