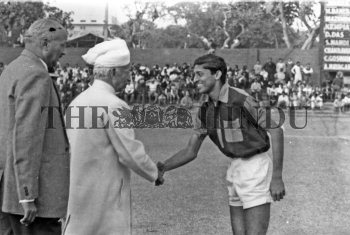 Caption : Dr. Radhakrishnan, President, Government of India, the Chief Guest accompanied by General Choudhary (behind), Chief of Army Staff and C. Goswami is seen before the start of the match, presented to Dr. Radhakrishnan, President of India for the finals of the football match between Mohun Bagan and Andhra Pradesh Police for Durand Cup Football Championship first match in New Delhi on December 11, 1963. (Reference Published in The Hindu on December 12, 1963) PHOTO: THE HINDU ARCHIVES