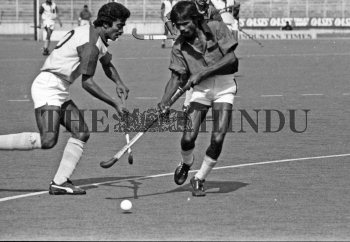 Caption : Mohammed Shahid of Railways and Fabia Nus Lakra of Bhopal fight for possession of the ball during the National hockey championship for the Rangaswamy Cup between Bhopal and Railway at the National stadium in New Delhi on February 08, 1984. Railways beat Bhopal by 9 - 0. PHOTO: THE HINDU ARCHIVES