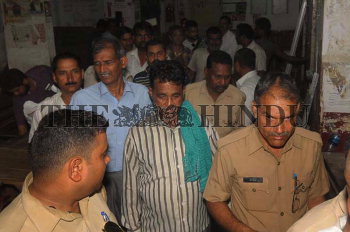 Caption : LUCKNOW, UTTAR PRADESH, 04/04/2016: POLICEMEN WHO KILLED PILIBHIT SIKH PILGRIMS JAILED: A special CBI court sentenced 47 policemen to life imprisonment for killing 10 Sikh pilgrims in a fake encounter in Pilibhit in Uttar Pradesh 25 years ago in 1991, at Lucknow on April 04, 2016. On July 12, 1991, the policemen stopped a luxury bus filled with Sikh pilgrims and forced 10 passengers to get off. The policemen claimed the next day that 10 Khalistani terrorists had been killed. They claimed that some of the Sikhs in the bus had criminal cases and were armed. The case dates back to 1991 when the state’s Terai region witnessed a surge in militancy-related incidents. The CBI investigated the case on the orders of the Supreme Court and said the motive behind the killings was to earn awards and recognition for killing “terrorists.” Photo: Rajeev Bhatt