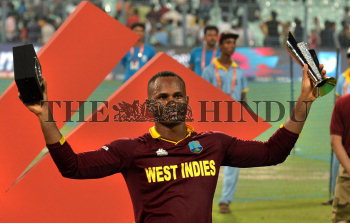 Caption : KOLKATA, WEST BENGAL, 03/04/2016: Marlon Samuels of the West Indies celebrates with the Man of the Match trophy after the West Indies beat England in the final of the ICC World Cup Twenty20 cricket championship by four wickets at the Eden Gardens in Kolkata on April 03, 2016. Photo: K.R. Deepak