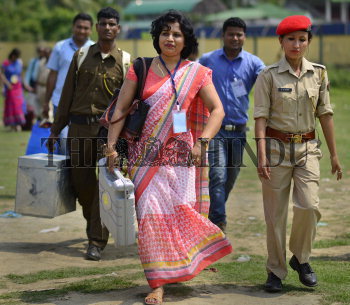 Caption : JORHAT, ASSAM, 03/04/2016: All women polling officials along with Electronic Voting Machines ( EVM) leaving for their polling stations on the eve of the polling in Jorhat district of Assam on April 03, 2016. This is for the first time in Assam that polling station, manned only by women officials have been set up with women polling and security personnel. First phase of polling for the Assam Assembly election will be held on 04 April 2016. Photo: Ritu raj Konwar