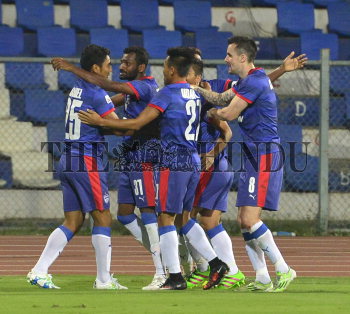 Caption : BENGALURU, KARNATAKA, 02/04/2016: Bengaluru FC's Daniel Lalhlimpuia being greeted by teammates after he scored the only goal of the game against Mumbai FC in the I-League football match played at Sree Kanteerava Stadium in Bengaluru on April 02, 2016. Photo: K. Murali Kumar