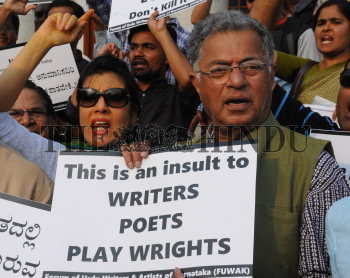 PROTEST AGAINST THE HRD MINISTRY

Caption : Karnataka, Bengaluru: 02/04/2016 : Jnanpith Awardee Girish Karnad with Urdu Writers along with English writers, Artists Cultural Activists and Playwrights of Karnataka Protest against the HRD ministry to mandatory for the Urdu writers to sign a declaration form stating that he would not oppose any policy of Government, at Town Hall in Bengaluru on April 04, 2016. Photo : Sudhakara Jain.