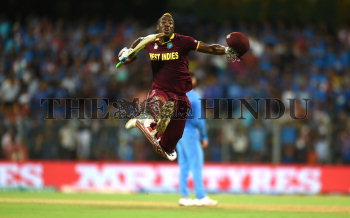 Caption : MUMBAI, MAHARASHTRA, 31/03/2016: Andre Russell of West Indies celebrates after guiding his team to victory against India in the semifinal of the ICC World Cup Twenty20 cricket championship at the Wankhede Stadium in Mumbai on March 31, 2016. West Indies beat India by seven wickets. Photo: Vivek Bendre