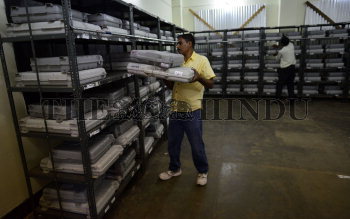 Caption : JORHAT, ASSAM, 30/03/2016: ELECTION OFFICIALS keep the EVM machines ready in a strong room for the first phase of Assam Assembly ELECTION in Jorhat town, Jorghat district of Assam on March 30, 2016. A total of 1.98 crore voters will elect legislators for the 126 seats contested in 25,000 polling stations in Assam state. In Assam, assembly polls will be held in two phases on April 4th and 11th 2016 respectively. Photo: Ritu Raj Konwar