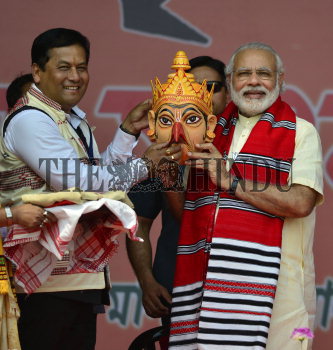 Caption : MAJULI, ASSAM, 26/03/2016: Prime Minister Narendra Modi is being welcomed with a traditional Assamese Mask by BJP's chief ministerial candidate Sarbananda Sonowal during an election rally in Majuli- the largest river island on the planet in Jorhat district of Assam on March 26, 2016. Modi visited visit Majuli to campaign for the party chief ministerial candidate Sarbananda Sonowal. A total of 1.98 crore voters will elect legislators for the 126 seats contested in 25,000 polling stations in Assam state. In Assam, assembly polls will be held in two phases on April 4th and 11th 2016 respectively. Photo: Ritu Raj Konwar