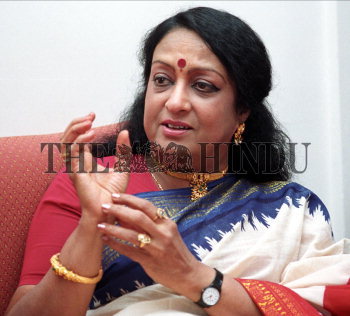 Caption : Dr.Padma Subrahmanyam in Kochi on September 25, 2003. She is primarily a dancer of great originality and daring but with her penchant for Indological research, she has been expanding her horizon over the decades and has emerged as a sound research scholar and author. Padma was born in a family in which the atmosphere was highly conducive to her development not only as a dancer but also as a musician and choreographer. With the guidance of T. N. Ramachandran, the renowned archaeologist, she studied the Natya Sastra and secured a Ph.D. from the Annamalai University for her thesis on Karanas. The divine glow from the Paramacharya of Kanchi was her guiding light in all her endeavours. She is perhaps the only Indian dancer who had the opportunity of visiting more than 25 countries of the world for presenting recitals and workshops and she used every such visit to conduct her academic research also. She authored four books, which included Kanchi Mahaswami's Vision of Asian Culture. In 2001 her students and admirers published a sumptuous volume Legacy of a Legend, which contained nine articles by Padma on amazing variety of subjects including the Bhagavad Gita and the concept of Sabda Brahman. She has also produced a 13-segment tele-film "Bharatiya Natya Sastra" for the national network, which won her an award. Photo: Johney Thomas