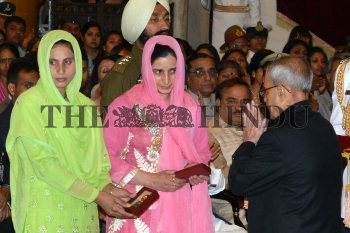 Caption : NEW DELHI, 22/03/2016: President Pranab Mukherjee presenting the Shaurya Chakra (Posthumous) to Constable Mohd Shafi Sheikh and Reyaz Ahmad Lone of J and K Police being received by thier wives during the presentation of the Defence Investiture Ceremony at the Rashtrapati Bhavan in New Delhi on March 22, 2016. Photo: R.V. Moorthy