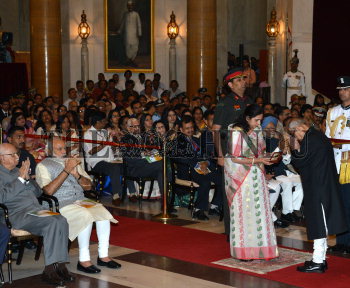 Caption : NEW DELHI, 22/03/2016: President Pranab Mukherjee presenting the Shaurya Chakra (Posthumous) to Colonel Munindra Nath Rai being received by his wife and watched by Prime Minister Narendra Modi and L.K. Advani, during the presentation of the Defence Investiture Ceremony at the Rashtrapati Bhavan in New Delhi on March 22, 2016. Photo: R.V. Moorthy