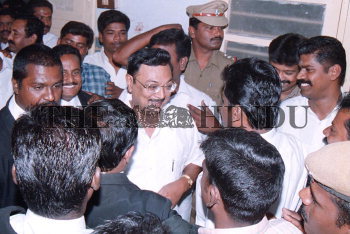 Caption : M.K. Azhagiri, son of the former Chief Minister M. Karunanidhi being brought to the Madurai court on September 25, 2003 in connection with the Kiruttinan murder case. The former DMK Minister, `Pasumpon' T. Kiruttinan, was murdered near his residence in Madurai by unidentified assailants on May 20th 2003. Photo: S. James