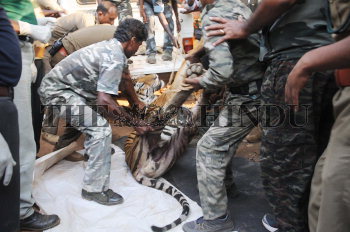 Caption : UDHAGAMANDALAM, TAMIL NADU, 19/03/2016: The Male Tiger which was shot dead at Devarshola near Gudalur being taken for postmortem at Ittemoola in Gudalur on March 19, 2016. Photo: M. Sathyamoorthy