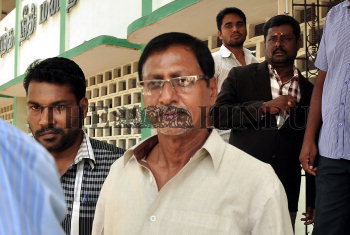 Caption : DINDIGUL, TAMIL NADU, 15/03/2016: Jafarullah, one of the accused, who was arrested and produced before the chief judicial magistrate court in Dindigul, Tamil Nadu, on March 15, 2016 on the charges of printing and circulating counterfeit notes in four southern states. Photo: G. Karthikeyan