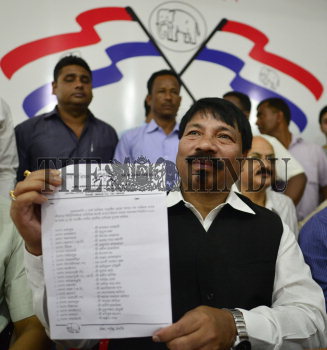 Caption : GUWAHATI, ASSAM, 10/03/2016: President of Asom Gana Parishad (AGP) Atul Bora releases its first list of candidates for the upcoming Assam assembly elections at party head office in Guwahati on March 10, 2016. The BJP and the Asom Gana Parishad (AGP), last week, formally announced tie-up for the ensuing polls and AGP to contest on 24 out of the 126 seats. The voting will take place in two phases- first phase of 65 constituencies on April 4 and second phase 61 constituencies on April 1, 2016. Photo: Ritu Raj Konwar