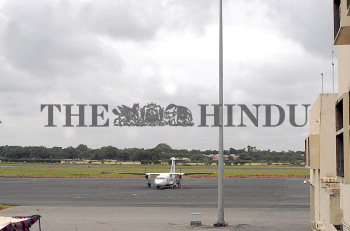 Caption : A view of the Air Deccan's plane from a distance at the Rajiv Gandhi Airport in Hyderabad on September 24, 2003. The plane's engine caught fire minutes before the inaugural flight from Hyderabad to Vijayawada. The Union Civil Aviation Minister, Mr. Rajiv Pratap Rudy, the BJP President, Mr. M. Venkaiah Naidu, and the Telugu Desam Parliamentary Party leader, Mr. K. Yerran Naidu, were in the plane and had to disembark.