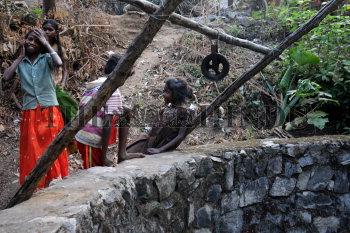 Caption : PALAKKAD, KERALA, 06/03/2016: Children playing beside a well at Kalliyampara tribal colony at Muthalamada near Palakkad. The well that has been used by Kalliyampara colony residents for drinking purposes has been found unfit for use with Central laboratory of Kerala State Pollution Control Board at Kochi detecting high presence of coliform bacteria in the water sample collected. The samples contained 300 cfu (colony forming units) of coliform which is above the permissible limits and thus rendered unfit for drinking purpose. Investigations led to a waste dumping yard close to the Kalliyampara tribal colony. The board has sent a notice to the owner of the orchard to remove the huge waste pile dumped by the factory as he had no permission from the statutory authorities to bring factory waste to the farm. Photo: K. K. Mustafah