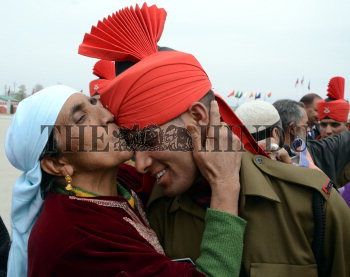 Caption : SRINAGAR, JAMMU AND KASHMIR, 05/03/2016: A mother kisses the face of her son after he graduated as an soldier during a passing out parade at an army base on the outskirts of Srinagar on March 05, 2016. The 242 recruits were formally inducted into the Army's JKLIR after the training. Photo: Nissar Ahmad