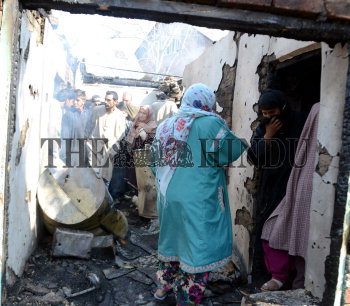 Caption : SRINAGAR, JAMMU AND KASHMIR, 03/03/2016: Kashmiri villagers inspect a house damaged during a gunbattle in Dadsar, south of Srinagar on March 03, 2016. Three Kashmiri militants were killed in a gunbattle with Security forces early Thursday as they tried to break through a security cordon. Photo: Nissar Ahmad