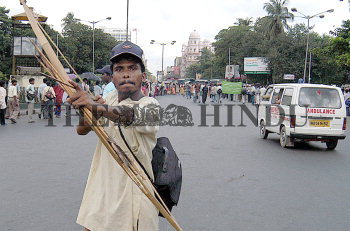 Caption : ĹLANGUAGE Warĺ: A member of a Santhali tribe aims his bow and arrow during a demonstration in demand for recognition of Santhal language in the mainstream, in Kolkata, on September 24, 2003. More than a lakh people took part in the demonstration, which choked the cityĺs traffic for hours. Photo: Parth Sanyal