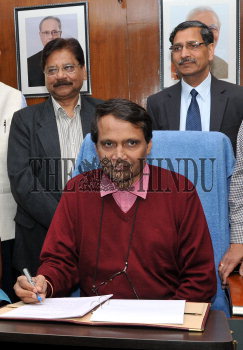 Caption : NEW DELHI, 24/02/2016: Minister for Railways, Suresh Prabhu with Railway Board Chairman, A.K. Mittal (right) and a member of the Board giving final touches to the Railway Budget 2016-17 at Rail Bhavan in New Delhi on February 24, 2016. Photo: Shanker Chakravarty