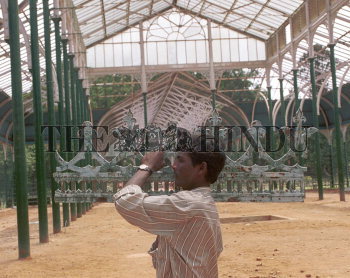 Caption : The repair works on the historical Glass House in Lalbagh started, in Bangalore vigorously from September 22, 2003. The Chief Minister S.M. Krishna during one of his visits to the world famous Botanical Gardens recently, had promised the citizens, that a facelift would be given, to both Lalbagh and the Cubbon Park and had entrusted the work to Bangalore Development Authority (BDA). Photo: T.L. Prabhakar