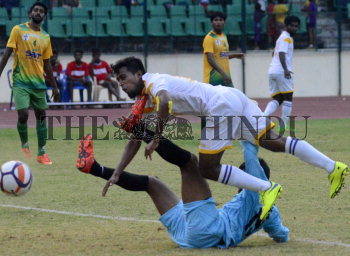 Caption : CHENNAI, TAMIL NADU, 13/02/2016: Tamil Nadu's A. Raegan (top) equalises against Kerala to ensure his team's passage to the next stage of the SANTOSH TROPHY football championship in Chennai on February 13, 2016. Tamil Nadu team topped Group 'A' to book a place in the SANTOSH TROPHY main draw. Photo: M. Vedhan