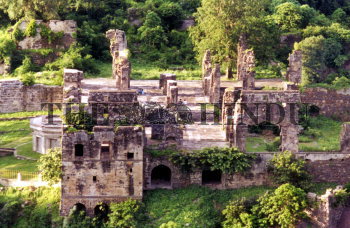 Caption : Historic Kondapalli Fort near Vijayawada in Andhra Pradesh. The fort has a great historic significance. It was built by Prolaya Vemareddi of Kondaveedu kingdom after the Reddirajas of Krishna district declared independence from the Delhi Sultanate. During the regime of Virupaksha Devaraya, the Gajapathi clan occupied the fort and made it the southern border of their kingdom. In 16th century Sri Krishna Devaraya defeated the Gajapathis and annexed Kondapalli along with Vijayawada and Srikakulam (Krishna district) to his kingdom. In the famous Battle of Talikot that occurred in 1565 the Vijayanagaram empire was smashed. Golconda Nawab Qulikutb Shah and the ruler of Kondapalli, Ramachandragajapati, battled with each other at Penuganjiprolu. Shah won the battle and Kondapalli fort. The fort is an asset in the district. Photo: Ch. Vijaya Bhaskar