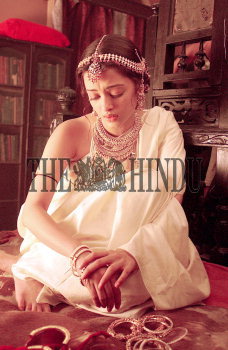 Caption : Actress Aishwarya Rai during the shooting of Chokher Bali, an adaptation of Rabindranath Tagore’s novel, directed by Rituparno Ghosh, in Kolkata. Some of the jewellery seen in the picture will be put on show in San Francisco’s Bay area as part of Durga Puja festivities. Photo: Parth Sanyal