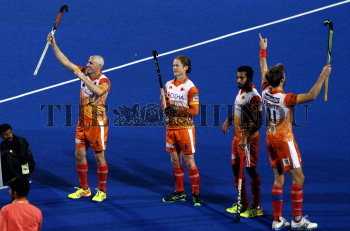 Caption : BHUBANESWAR, ODISHA, 05/02/2016: A jubilant Glenn Turner of Kalinga Lancers waves his hockey stick towards the crowd after scoring the first goal against Delhi Waveriders in the Coal India Hockey India League at the Kalinga Stadium in Bhubaneswar on February 05, 2016. Photo: Linagaraj Panda