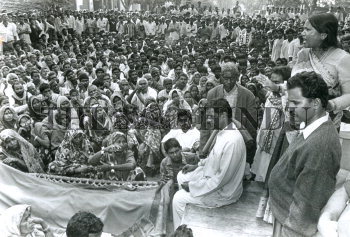 Caption : Pholan Devi, a bandit queen, Samajwadi Party Candidate seen in the election campaign to the Lok Sabha from Bhadohi in Uttar Pradesh, leading a dharna in the constitutency to protest against voilence by rival party workers which led to the death of a Samajwadi Party worker on February 18, 1998. (Published in The Hindu on February 19, 1998) PHOTO: THE HINDU ARCHIVES