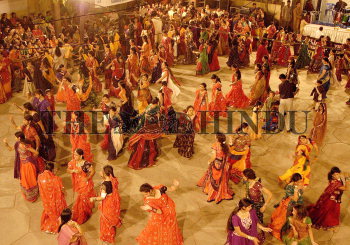 GARBA A TRADITIONAL DANCE OF GUJARATIS

Caption : Women clad in traditional Gujarati dresses perform "Garba", a Gujarati folk-dance, to mark the forthcoming Navratri festival at a function organised by Gujarati Yuva Mandal in Hyderabad on September 20, 2003. The Navratri (nine night) festival marking the onset of autumn is celebrated in different means by Hindus all over the country. The festival of dance, worship and music continues from the first to ninth day of Ashwin Shukla Paksha of the Hindu calendar for the worship of Goddesses Durga, Vijayashtami and Mahanavami. The annual Navratri festival starts on September 25th this year. The characteristics of the dance, Garba, is that participants move round in a circle around a `mandvi' (garbo), a structure to hold earthen lamps and also houses the image or idol of the Mother Goddess. Women wear ethnic chania choli, while men wear dhoti-kurta and dance throughout the night. Though traditionally it is Gujarati folk dance form, it's appeal has transcended regional barriers. Photo: Mohammed Yousuf.