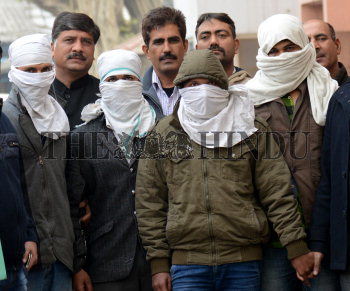 Caption : NEW DELHI, 20/01/2016: In a joint operation, the special cell of the Delhi Police along with Intelligence Agencies have arrested four suspected terrorists, Akhlaq, Osama, Mohammad Afroz and Mohammad Aziz from Haridwar, who were planning to target the ongoing Ardh Kumbh mela in Haridwar as well as some vital installations in the National Capital, in New Delhi on January 20, 2016. Photo: V. Sudershan