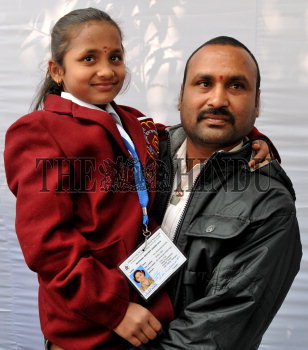 Caption : NEW DELHI, 18/01/2016: Km. Shivampet Ruchitha (Telangana) with her FATHER, who won the Geeta Chopra Award will be conferred the National Bravery Awards 2016 for her exemplary efforts in bravery, during an interaction with media, in New Delhi on January 18, 2016. Photo: Shanker Chakravarty