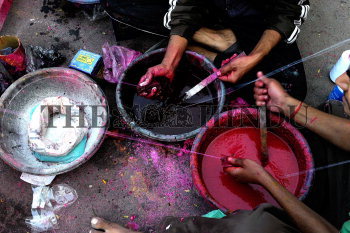 Caption : Ahmedabad, Gujarat, 13/01/2016: Kites thread in making at roadside in Ahmedabad during Uttrayan as Uttarayan means Makar Sankranti, falls on every year January 14th, The International Kite Festival (Uttarayan) is regarded as one of the biggest festivals celebrated. Months before the festival, homes in Gujarat begin to manufacture kites for the festival. The festival of Uttarayan marks the day when winter begins to turn into summer, according to the Indian calendar.It is the sign for farmers that the sun is back and that harvest season is approaching which is called Makar Sankranti. This day is considered to be one of the most important harvest day in India. Many cities in Gujarat organize kite competition between their citizens where the people all compete with each other. In this region of Gujarat and many other states, Uttarayan is such a huge celebration that it has become a public holiday in India for two days. During the festival, local food such as Undhiyu (a mixed vegetable including yam and beans), sesame seed brittle and Jalebi is served to the crowds.Days before the festival, the market is filled with participants buying their supplies. The Tourism Corporation of Gujarat mentioned that the International Kite Festival in Gujarat was attempting to enter the Guinness World Records book due to the participation of 42 countries in the year 2012. Photo : Vijay Soneji.