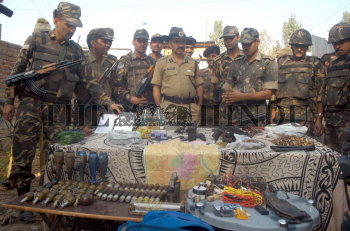 Caption : Border Security Force soldiers display the arms and ammunition which they recovered from an under ground dump (hideout) during a raid on a house at Qamarwari in Srinagar on September 20, 2003. BSF recovered large quantity of arms and ammunition from the hideout. Photo: Nissar Ahmad