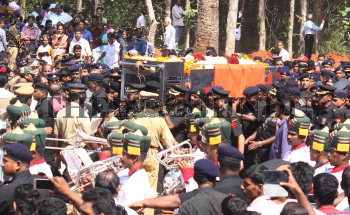 Caption : PALAKKAD, KERALA, 05/01/2016: Police open fire in the air as part of the full official honours during the cremation of Lt Col E K Niranjan, who died in the Pathankot terror attack, at Elambulassery, a village in Mannarkad near Palakkad on January 05, 2016. Photo: K. K. Mustafah