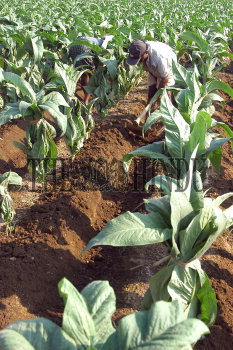 Caption : Workers engaged in a tobacco farm near Perya in Kerala's Kasaragode district. Tobacco is one of the important commercial crops of India, cultivated in an area of 0.40 million hectares and produces about 700 million kg of tobacco. The country occupies third place in area and production after China and Brazil, accounting for 10 per cent of the world's area and 9 per cent of tobacco production providing employment to 36 million people including 6 million farmers. Photo: K_K_Mustafah 12/02/08