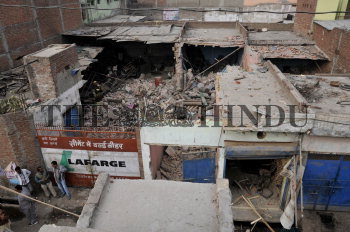 Caption : NEW DELHI, 11/12/2015: The scene at the godown after a cylinder blast in which two people were killed and some injured at Bhagirathi Vihar in North East Delhi on December 11, 2015. Photo: Shiv Kumar Pushpakar