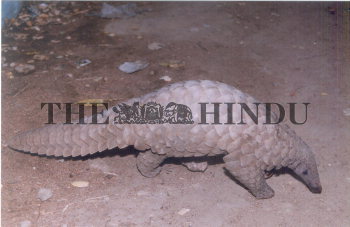 Caption : Pangolin also called "Scaly Anteater" , one of the armoured placental mammals of the order Pholidota. Pangolin from the Malayan meaning "rolling over" refers to this animal's habit of curling into a ball. Body covered with overlapping brownish scales, almost arboreal, feed mainly on termites, but also eats ants and other insects. Pangolins were once grouped with true ant-eaters, sloths, and armidillos in the order Edentata, mainly beacause of superficial likenesses to South American ant-eaters, Picture shows Pangolin, caught by a farmer of Pazhavilai village near Srivaigundam in Tuticorin district . Picture shows the ant-eater captured at Thulukkarkulam near Tirunelveli. Photo: A . Shaikmohideen, September 18, 2003.