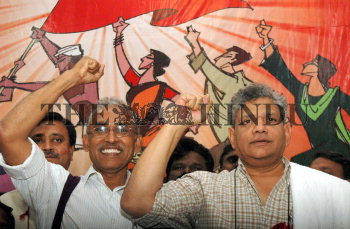 Caption : HYDERABAD, 10/02/2008: Red Salute Comrade: B.V.Raghavulu is all smiles after he was re-elected for the fourth consecutive time as CPI(M) State Unit Secretary in presences of party's Politburo member Sitaram Yechuri at the 22nd State Conclave that concluded at Pragatinagar in Ranga Reddy district of Andhra Pradesh on February 10, 2008. Photo: Mohammed Yousuf