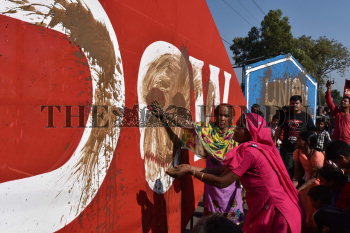 Caption : BHOPAL, MADHYA PRADESH, 03/12/2015: Hundreds of survivors with their supporters from different part of the country smearing mud over the logos of Union Carbide and Dow Chemical, during a protest rally on the 31st anniversary of Bhopal Gas Disaster, in Bhopal on December 03, 2015. Photo: A. M. Faruqui