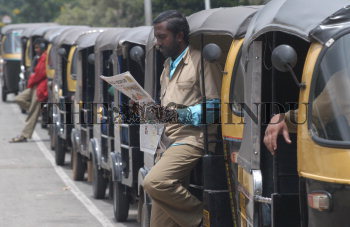 Caption : The Karnataka Government has directed the transport authorities to issue permits to 5,000 more autorickshaws in Bangalore, Karnataka. The permission will be given only to those rickshaws fitted with LPG kit. The directive has also banned sale or transfer of autorickshaws which do not run on LPG. There are already around 70,000 autorickshaws on the road. Photo: G.R.N. Somashekar 18/9/2003