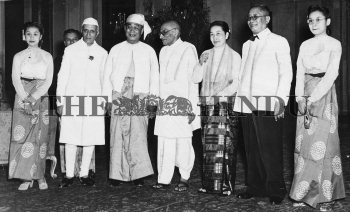 Caption : Mr. C. Rajagopalachari held a reception at the Government House, New Delhi, on September 1, 1949, in honour of U E Maung, Foreign Minister of Burma, who visited the capital as the State guest of the Government of India. This group photograph was taken at the reception. On the left of Pandit Jawaharlal Nehru, the Prime Minister of India, are seen U.E. Maung, C. Rajagopalachari, Madame Maung Gyi, wife of the Burmese Ambassador in India and Sir Maung Gyi, the Burmese Ambassador in India and his daughter Miss Gywene Gyi. On Mr. Nehru's right appears Miss Lily Gyi, another daughter of the Ambassador.