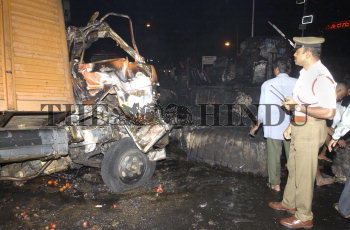 Caption : The damaged mini lorry which collided with a truck (seen in the background) on Tumkur ROAD in the wee hours of September 17, 2003. Six persons were charred to death when a mini-lorry in which they were travelling rammed a truck and burst into flames at Goraguntepalya on the outskirts of Bangalore. Among the dead were four farmers and the driver of the mini-lorry. One person who suffered serious injuries has been hospitalised. Photo: T.L. Prabhakar.