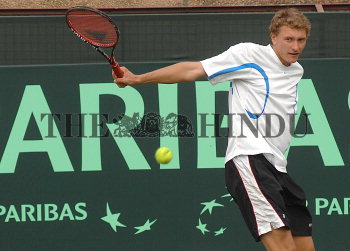 Caption : NEW DELHI, 07/02/2008: Denis Istomin of Uzbekistan in action during a practice session on the eve of the Davis Cup tennis tournament against India at the R.K. Khanna Tennis Stadium in New Delhi on February 07, 2008. Photo: Rajeev Bhatt