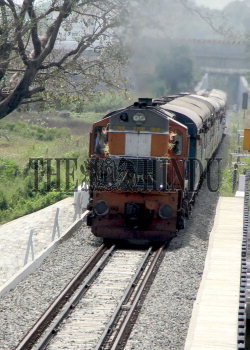 Caption : PALAKKAD, KERALA, 16/11/2015: A passenger train coming from Pollachi, passing through the Kannadipuzha near Palakkad on November 16, 2015. With the much-awaited gauge conversion between Palakkad and Pollachi turning into a reality. The Railways can start services on the route after the safety inspection. Of the 54-km stretch, 22 km is in Tamil Nadu. The rest of the stretch is in Kerala, spreading between the Meenkara dam and Palakkad Town railway station. The metre-gauge line between Pollachi and Palakkad was closed down in 2008 with an assurance that it would be reopened in 16 months as a broad gauge. Photo: K. K. Mustafah